A Tree Is Known by Its Fruit

Luke 6:43-45  For a good tree does not bear bad fruit, nor does a bad tree bear good fruit. 44 For every tree is known by its own fruit. For men do not gather figs from thorns, nor do they gather grapes from a bramble bush. 45 A good man out of the good treasure of his heart brings forth good; and an evil man out of the evil treasure of his heart brings forth evil. For out of the abundance of the heart his mouth speaks.

Fruit comes out of the heart, good or bad, through our words and actions. Our mouth plays an integral part in what kind of fruit we bear, for out of our mouth comes the fruit of our tree. Whatever is in us in abundance will eventually come out as fruit in the form of words and actions.

Fruit is intended for consumption and nourishment.  We are the ones that consume most of the fruit that we bear. Our minds must be renewed so that we will be transformed into a good tree.

Make the tree good and its fruit will be good. When the fruit is good, we increase our ability to nourish, increase and sustain our spiritual health and growth.

The key is: WE MUST MAKE OUR TREE GOOD! Spiritual growth and development is not automatic. We must cooperate with our Father to grow into the child that He paid for. We have been adopted, and that adoption came at a great price. He paid for our past and gave us a down payment on the future, the Holy Spirit.

2 Corinthians 1:22 who also has sealed us and given us the Spirit in our hearts as a guarantee.

Ephesians 1:13  In Him you also trusted, after you heard the word of truth, the gospel of your salvation; in whom also, having believed, you were sealed with the Holy Spirit of promise, 14 who is the guarantee of our inheritance until the redemption of the purchased possession, to the praise of His glory.

The Holy Spirit is here as a helper, and advocate, an intercessor. To help us embrace the life and nature of God that now dwells in us as believers. It is our cooperation with the Holy Spirit that makes us good trees, bearing the fruit of holiness.

Isaiah 61:3 calls us; “trees of righteousness, the planting of the Lord. That He may be glorified.” We have been grafted in to the root of THE good Tree. Because of that, we ARE righteous, holy, and blameless in his sight. We have been made righteous by the blood of Christ! When we set ourselves in agreement with that truth, and believe that we are righteous in spite of our performance, we make the tree good, and the righteous tree is empowered to produce righteous fruit. Until you agree with what god has said about you, you will not be empowered to live out the righteousness that Christ paid for.

Colossians 1:21-22  And you, who once were alienated and enemies in your mind by wicked works, yet now He has reconciled 22 in the body of His flesh through death, to present you holy, and blameless, and above reproach in His sight—

The fruit that you see is ALWAYS a result of the ROOT that you cannot see. We tap into the life in the root by keeping God’s word in our hearts and minds and being obedient to what we learn. Looking into God’s word, and obeying it, is like looking into a mirror. If you stop looking in the mirror, you will forget that you are a good tree.

James 1:23-24 For if anyone is a hearer of the word and not a doer, he is like a man observing his natural face in a mirror; 24 for he observes himself, goes away, and immediately forgets what kind of man he was.

Comments Off on Make Your Tree Good!

How To Deal With Goats In The Church 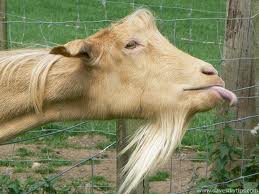 This is mainly for all the pastors out there but it is important that we all know this principle and understand how to identify a goats behavior. As pastors, you know how to shepherd the sheep and protect them from wolves. You know what to do FOR the sheep and you know what do TO the wolves. But what do you do with goats?

They are there! They are either in your congregation now, they have been or will be. Goats are like tares, you can’t remove them because Jesus said you would just hurt the sheep. Matthew 13:29 So how do you deal with goats?

First lets define what a goat is; A goat is one who likes to hang out with the sheep, eat the sheep’s food, go where the sheep go and do what the sheep do. But goats don’t like to listen to the shepherd. Goats will only follow a shepherd when it serves their own purpose and their own agenda. By the way goats always have an agenda.

A goat may be a big contributor financially but they give a lot of money because they want recognition, respect, and to gain some form of control in the congregation. They may even become pushy about it. They may serve in areas of the church faithfully because they eventually want some form of authority or a certain position with a title. Typically a goat will have an elevated opinion of their own spiritual maturity, to the point of believing that they are just as mature and spiritual as anyone in the church, including the pastor.

The clincher is that goats have a real problem with any kind of correction. If an elder or the pastor has cause to bring any kind of correction, they usually get offended and leave the church. While they are leaving they will gossip to everyone that will listen and lobby for support of their sad “goatly” cause. Goats will ALWAYS feel like you owe them something, at the very least an apology. Any people come to mind yet? If you have been in the ministry any length of time you recognize the pattern I just described.

So how do you deal with the goats? You can’t shepherd them because they do not want to be shepherded and yet they wish to remain in the fold. There is always a chance that they will convert and become sheep but until that happens  …. What do you do? Here is what Jesus does to goats on the day of judgment;

Matthew 25:32 ~And before him shall be gathered all nations: and he shall separate them one from another, as a shepherd divideth his sheep from the goats:

But what do you do with goats?

First and foremost, you LOVE them! Love never fails and love is the best way to preach Christ to a person who really isn’t interested in listening unless it serves them.

Second, Goats don’t really know who they are. They suffer from an identity crisis, so it is important to preach a clear gospel message about their identity in Christ.

Thirdly, YOU MILK THEM. The only way to deal with a goat, apart from loving them and teaching them truth is to milk them. Milk them for everything that they choose to give and every service that they choose to provide. Love them, but watch them! Watch who they associate with because eventually goats will flock together. Make sure they don’t cause division within the body and convert a sheep to a goats way of thinking, BUT MILK THEM. If you do put them in charge of something make sure that it is task oriented only and that they are NOT in charge of other people. The desire to control sheep is at the root of every goats agenda.

This may sound cold and unloving but it is not. Milking a goat is an important part of the goats learning process. Goats will typically get offended and leave after they have “given so much” and were not recognized or appreciated. They may do this a number of times before they realize that THEY are the problem and humble themselves and repent. Some goats will never repent and they will be separated at the day of judgment. The goats have a terrible fate awaiting them.

Matthew 13:24-42  Another parable put he forth unto them, saying, The kingdom of heaven is likened unto a man which sowed good seed in his field: 25 But while men slept, his enemy came and sowed tares among the wheat, and went his way. 26 But when the blade was sprung up, and brought forth fruit, then appeared the tares also. 27 So the servants of the householder came and said unto him, Sir, didst not thou sow good seed in thy field? from whence then hath it tares? 28 He said unto them, An enemy hath done this. The servants said unto him, Wilt thou then that we go and gather them up? 29 But he said, Nay; lest while ye gather up the tares, ye root up also the wheat with them. 30 Let both grow together until the harvest: and in the time of harvest I will say to the reapers, Gather ye together first the tares, and bind them in bundles to burn them: but gather the wheat into my barn. 31 Another parable put he forth unto them, saying, The kingdom of heaven is like to a grain of mustard seed, which a man took, and sowed in his field: 32 Which indeed is the least of all seeds: but when it is grown, it is the greatest among herbs, and becometh a tree, so that the birds of the air come and lodge in the branches thereof. 33 Another parable spake he unto them; The kingdom of heaven is like unto leaven, which a woman took, and hid in three measures of meal, till the whole was leavened. 34 All these things spake Jesus unto the multitude in parables; and without a parable spake he not unto them: 35 That it might be fulfilled which was spoken by the prophet, saying, I will open my mouth in parables; I will utter things which have been kept secret from the foundation of the world. 36 Then Jesus sent the multitude away, and went into the house: and his disciples came unto him, saying, Declare unto us the parable of the tares of the field. 37 He answered and said unto them, He that soweth the good seed is the Son of man; 38 The field is the world; the good seed are the children of the kingdom; but the tares are the children of the wicked one; 39 The enemy that sowed them is the devil; the harvest is the end of the world; and the reapers are the angels. 40 As therefore the tares are gathered and burned in the fire; so shall it be in the end of this world. 41 The Son of man shall send forth his angels, and they shall gather out of his kingdom all things that offend, and them which do iniquity; 42 And shall cast them into a furnace of fire: there shall be wailing and gnashing of teeth. 43 Then shall the righteous shine forth as the sun in the kingdom of their Father. Who hath ears to hear, let him hear.

As a pastor, you are responsible for the sheep, not the goats. However, protecting the flock from goats is an issue most pastors will face repeatedly. God will allow Satan to send goats into your midst for their perfecting and for yours. Remember to love them but never let a goat gain any kind of control. Allow them to give to the ministry in any way that benefits you and your flock, but watch them…and pray for them. Above all, be merciful, compassionate, and love them. Remember that Jesus saw fit to pay the same price for their redemption as yours.

Posted in Pastors and Leaders, The Christian Walk